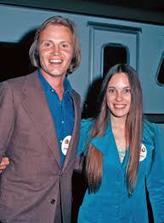 Marcheline Bertrand and Jon Voight
Angelina Jolie is the daughter of actors, Jon Voight and Marcheline Bertrand. Award-winning actor, Jon Voight, and actor, producer and model, Marcheline Bertrand, had two children, James Haven and Angelina Jolie. Angelina grew
up in Los Angeles, California with her parents. The two were married for almost ten years, then divorced in 1980. Soon after the divorce, Marcheline gave up her acting/producer career to care for her two children. Angelina, as well as
her brother, lived with their mother and didn't have much contact with their father growing up. But  Angelina recalls always having happy childhood memories. When Angelina was six years old, her mother decided to move to Palisides,
New York for a few years, but returned to their home Los Angeles, California by the time Angelina turned eleven.

When Angelina was back in Los Angeles she was atteneding Bevelery Hills High School, and also enrolled herself in the Lee Strasburg Theatre and Film Institute because she decided she wanted to become serious about her career. While Angelina was enjoying her acting lessons at the theatre and film institute, she was completely miserable at Beverly Hills High School. She was constantly teased for being too skinny and wearing glasses. Angelina's peers also made comments about her braces and her natural, pout lips. Angelina stated that she felt isolated in her school throughout her high school years. Though Angelina was bullied, she never withdrawed her dreams and still pushed for being an actress. Her mother was very supportive of her decisions and was persuaded her to engage in a modeling career, but was turned down. All of the judgement lead Angelina to doubt her self-worth.

At the age of fourteen, Angelina dropped out of Beverly Hills High School and, with her mother's approval, moved in with her 'punk-rocker' boyfriend. As time passed, Angelina developed a 'dark demeanor,' or behavior, and a 'gothic' appearance. Soon after Angelina moved in with her boyfriend, she dyed her hair purple, starting engaging in dangerous activities such as knife-play, and admitted to experimenting with almost
every drug possible. Not only did Angelina have behavioral problems, she also had mental health problems. As a teenager, Angelina suffered
small stages of insomnia, a sleeping disorder which one has an inability to fall asleep for long periods of time. She suffered small stages of
anorexia and depression. Angelina also self-harmed herself, not neccessarily because she wanted attention or wanted to punish herself,
but she loved the pain. Angelina Jolie stated, "For some reason, the ritual of having cut myself and feeling the pain, maybe feeling alive,
feeling some kind of release, it was somehow theurputic to me." Angelina took her feelings to extreme and attempted to commit suicide twice.
At age twenty-four, Angelina experienced a nervous breakdown and admitted to seventy-two hours in UCLA Medical Center's psychiatric ward. Two years later, Jolie found stability in her life and adopted her first child. She stated, "I knew once I comitted to Maddox, I would never be
self-destructive again." Though Angelina overcame her 'dark stages,' she stated that, "I am still at heart-and will always be-just a punk kid with tattoos."

As Angelina grew older, she starred in more films, started directing, took on a modeling career, and got involved with humanitarian works. Angelina loves children and loved working with them as well. By the time Angelina was in her early thirties, she had six children. Three of Angelina's children were biologically her's and three were adopted internationally. Angelina is in love with the fact that she is the mother of children who weren't biological. Angelina once said, "I'm drawn to kids that are already born. I think some people are meant to do certain things, and I believe I'm meant to find my children in the world somewhere and not neccessarily have them genetically." Angelina adopted her first child, Maddox Chivan Jolie-Pitt, from Battanbang, Cambodia. She wanted to do everything to protect and care for her child, so she got a tattoo on her left shouler blade to protect her and Maddox from bad luck. A Buddhist Pali iniciation written in Khmer script, the language of Cambodia that translates to, "May your enemies run far away from you. If you acquire riches, may they remain yours always. Your beauty will be that of Apsara. Wherever you may go, many will attend, serve and protect you, surrounding you on all sides." About three years later, Angelina decided to adopt another child. She adopted her a young girl, Zahara Marley Jolie-Pitt from Addis Ababa, Euthopia on July 6, 2005. A year later, Angelina and Brad traveled to Swakopmund, Namibia, trying to avoid the media, for the birth of their first biological child. On May 27, 2006, Angelina gave birth to her daughter Shiloh Nouvel Jolie-Pitt. Then, on March 15, 2007, Angelina adopted her son, Pax Thien Jolie-Pitt from Ho Chi Minh City, Vietnam. And on July 12, 2008, Jolie gave birth to a set of twins in Nice, France. A girl, Vivienne Marchelina Jolie-Pitt, and a boy, Knox Leon Jolie-Pitt. In rememberance of where her children were adopted or born, Angelina got a tattoo on her left shoulder that contains all the geographical coordinates of her children's birthplace.
Though Angelina was kept busy with her six children, she still managed keep the media's attention. In 2013 she gave everyone a huge scare when she announced that she was a carrier of a cancer-causing gene. When Jolie tested positive for a genetic mutation, BRCA1, it left her with a high risk of developing breast and/or ovarian cancer. Given that Angelina's mother had ovarian cancer, increased the risk. BRCA1 is a tumor suppressor gene, meaning a gene that protects a cell from one step on the path to cancer. When this gene mutates, the cell can progress to cancer. To avoid developing cancer, Angelina had a double mastecetomy. When she announed her experience to the public, studies show that women became more curious about their family history and started taking interest in their body such as Angelina. More women started taking tests to take care of their health, the media called this the 'Angelina Jolie effect.'

Now Angelina is better than ever. She's living a great life with her husband and children. But, as Angelina is aging, as well as her children, we've been seeing less of her on the big screen. In an interview, Angelina stated that once her children hit their teenage years, she will eventually give up her career as an actress to take care of her children. Not only is Angelina's focus on her kids, but Brad has also begun to consider what's best for his family. And considering that their oldest child is now in his teenage years, we will be seeing a lot less of Angelina and Brad.
Powered by